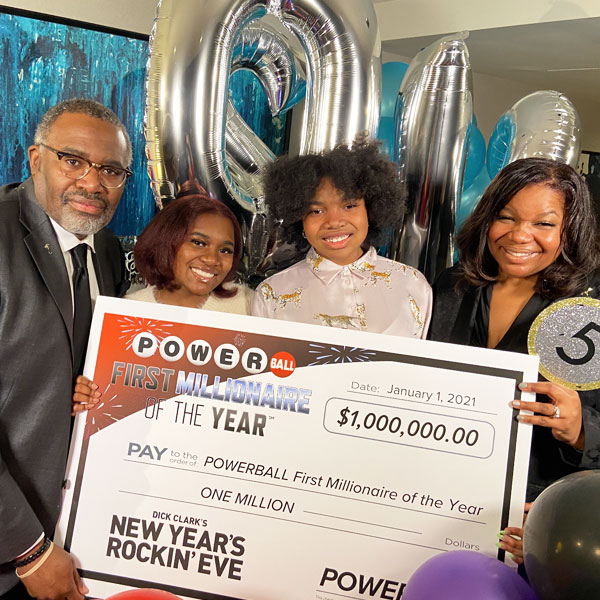 America’s Biggest Celebration of the Year

“Congratulations to the POWERBALL First Millionaire of 2021!” said May Scheve Reardon, POWERBALL Product Group Chair and Missouri Lottery Executive Director. “POWERBALL and its lottery partners look forward to sharing more thrilling moments of winning in the New Year, while raising funds for vital public programs and services across the country.”

Returning after a successful inaugural launch in 2020, this year’s promotion included  19 participating lotteries that held second-chance drawings and contests in their respective jurisdictions to determine a national pool of semi-finalists. From that pool, five finalists were randomly selected to advance to the $1 million drawing. In addition to the chance to win $1 million from POWERBALL, each finalist also received an incredible New Year’s Eve at-home party prize package that included a $12,500 cash prize, deluxe surf-and-turf dinner, 70-inch LED TV, karaoke system, $500 gift certificate to Party City, and much more. Decker, who checked in with the finalists across the country throughout the night, ultimately revealed Mabry as the POWERBALL First Millionaire of 2021.

For more information on the “POWERBALL First Millionaire of the Year” promotion, please visit www.powerballrockineve.com.

About POWERBALL
It’s America’s Game! Since its first drawing in 1992, POWERBALL® has inspired the country with a chance to become a millionaire, while raising $25 billion for good causes supported by lotteries. POWERBALL set a world record jackpot of $1.586 billion in January 2016. The record prize was shared by winners in California, Florida and Tennessee. POWERBALL tickets are $2 per play. Tickets are sold in 45 states, the District of Columbia, Puerto Rico and the U.S. Virgin Islands. Drawings are held every Wednesday and Saturday at 10:59 p.m. ET. More than half of all proceeds from the sale of a POWERBALL ticket remain in the jurisdiction where the ticket was sold. For more information, visit www.powerball.com.